I am not belonging to the academic world of anthropology, ethno musicology or any social science (children of good families  who go to universities, and  become professors, career oriented suckers or jobless), passion for different music has taken me there, having to cop with rough conditions of life, disease and  not my favorite food; aiming to record minority people who without surprise are among the poorest people, considered primitive by dominant ethnic groups in the area.

I was always turned off by commercial music, it makes me sick to witness the worst shit in world music shadowing the real traditional music, so my job is to show the authentic remaining music that exist in ZOMIA.

https://thequietus.com/…/26198-sublime-frequencies-alan-bis…
ALAN BISHOP S LOVE DECLARATION :
“Laurent is one of us and we immediately loved him from the beginning. He’s fearless, doesn’t hold back his opinions, has worked his ass off and prefers to live with the musicians he records for longer periods of time, mostly in China and Southeast Asia. The quality of sound he produces is consistently great. He runs the Kink Gong label and has a solo project by the same name. We started working with him early on and still do, and his archive of recordings is mind-boggling.”

the cultural reality :
“Laurent is not one of us and we immediately hated him from the beginning. He s full of shit, does not hold back his opinions on women, avantgarde suckers or cultural immigration policy, has ripped off poor ethnic minorities musicians by stealing their cultures mostly in China and Southeast Asia. The quality of sound he produces is consistently mediocre. He runs the kink gong label and has a racist project with the same purpose : moneytising cultures he does not belong to. We did not answered him and we don t give a shit about his archive of recordings” 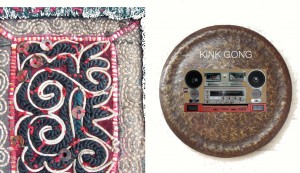